Angel investors can expect favorable payoffs with only 10 deals, but it takes at least 20 investments to truly be safe.

via A simulation of angel investing, part 2.

via TraderFeed: Winding Down the TraderFeed Blog.

Term sheets of one or two pages

One of venture capitalâ€™s oldest and most reliable partnersÂ was hard to findÂ in 2009, according to an annual survey that examines where the private equity asset class receives its capital.

The cutback partly contributed to the venture capital industryâ€™s fund-raising slump last year. Venture firms raised $13 billion in 2009, down 54.6% from the $28.7 billion raised in 2008. 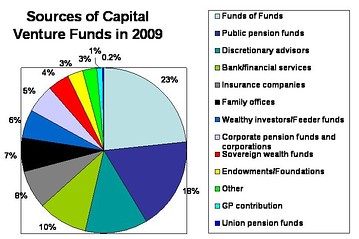 Notions of fairness increase steadily as societies achieve greater market integration (see chart). People from better-integrated societies are also more likely to punish those who do not play fair, even when this is costly to themselves.

via The origins of selflessness: Fair play | The Economist.

If you look at the entrepreneurship programs at various schools, you can figure out where those programs’ stances are on whether entrepreneurship can be taught.Â  That’s a post for another day.Â  Here’s a blogger who thinks its neither taught nor natural, and I really appreciate his position, although I might not agree completely:

Business schools and conferences have institutionalized entrepreneurialism as an avocation like law or medicine when it is more often a streak of temperament, luck and inspiration. Far from a program taught by somebody else, entrepreneurialism has always been for me my only shot at being myself.

via To Steve Or Not To Steve?.

In the past, studio executives made deals to include products in films. Now, with the help of people like Mr. Yospe, writers and producers themselves are cutting the deals often before the movie is cast or the script is fully shaped, like â€œThe 28th Amendment,â€ which Warner Brothers has agreed to distribute.

via Branding Deals Come Early in the Filmmaking Process – NYTimes.com.

There are two instructively contradictory data points out in venture capital land this morning:

How can that be?, some might ask. How can one fund be so wildly oversubscribed when the industry is in the worst fund-raising doldrums in modern memory?

via Growthology: VCs are Down! VCs are Up! The Compression of Risk Capital Commitments.

The new offerings are in large part the result of the new economics of in-flight food. Kevin Jackson, managing director of consumer marketing for US Airways, said that when airlines gave away food, â€œthe motivation was to minimize cost.â€ Now that most airlines are selling food, they have an incentive, he said, to â€œprovide better choice and quality for passengers.â€

via No Longer Free, Airplane Food Tries to Be Tasty – NYTimes.com. Revenue over time for Microsoft, Apple and Google

via The money made by Microsoft, Apple and Google, 1985 until today | Royal Pingdom.